From Memory and Manual Data Collection to Digital Automation

We recently checked in with Cory Spieker, Water & Street Superintendent with The City of Charles City. They were looking for a work order and asset management solution to better organize their meter changeout and hydrant inspections, as well as their Lead and Copper program. In addition, they wanted a platform that was versatile enough to handle public works functions such as vehicle fleet management, streets, stormwater, equipment inspections, and more without having to acquire additional software.

When we asked Cory what he would say to other utilities looking to implement a work order and asset management solution, he replied, "The sooner the better!"

Cory needed a system of record to streamline his manual processes. His record-keeping system made sense to him but it was all kept inside his head. For example, if someone else needed to find a hydrant inspection from last year, they wouldn’t know how to access it. Work was being done on paper and because it wasn’t being documented properly, duplication of work was common. Paper lists would get lost and the department had to rely on staff members to remember whether critical work tasks had been completed. 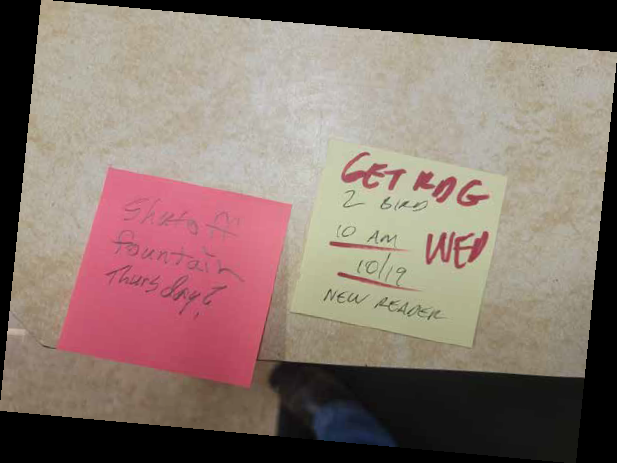 “Before Utility Cloud” was a system of post-it notes and memory.

The City previously used a very basic work order program that only City Hall had access to. Many times City Hall would call requesting a meter reading or a meter changeout on short notice and no work order would get done. The information was written down on a Post-It note. Work requests were kept on those PostIt notes which were then handed off to the field worker. A few days later they were brought back to be either thrown out (if the work was completed) or stuck back on the wall if there was more work to be done. Oftentimes the Post-It notes would pile up and then operators would go through and toss them if the work was done, or put them back up on the wall if the work still needed to be completed. Preventive maintenance at the plant was recorded on a whiteboard. They used different colors to identify different operators and keep track of when maintenance was performed and when the next maintenance was required.

Cory saves at least an hour a day on data entry alone now that they have implemented Utility Cloud. The field team now inputs their data directly into digital forms on their tablets and it is synced to the office for immediate visibility. They also automate work orders on follow-up work using triggers within the Utility Cloud platform. They’re also saving time by taking pictures of the old meter and new meter, then uploading them to Billing. This way, if there are any questions, they can refer to the photo rather than having to go back out to the location to verify information. 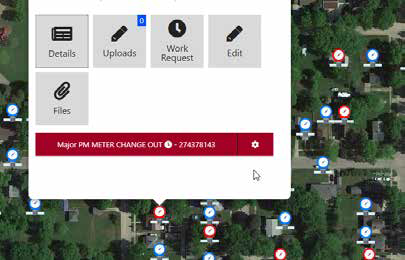 Now they can see the work order on a map and/or on a calendar view. The system will remind them when it needs to be done so they don't have to worry about forgetting an important task.

The City of Charles City has integrated Utility Cloud with their Esri® GIS and are now able to pull up all their maintenance history and locations on water valves and hydrants within the Utility Cloud platform.

Cory said the implementation process was “very smooth.” The Utility Cloud Professional Services team asked questions about their business needs and helped them prioritize which tasks to tackle first. They pulled in all the billing information from old meters and will be bringing around 1,700 work orders into the system.

As with many utilities, The City of Charles City had some field workers who weren’t very “tech savvy”. Adoption of Utility Cloud by field staff was initially a concern when The City of Charles City decided to modernize their operations with mobile forms. Due to the ease of use of the platform, Cory said he hasn’t had any resistance to the implementation! They eased into the change and made the digital forms as easy as possible to complete. The team quickly realized the significant time savings, and how much more accurate their work became. Utility Cloud’s onboarding process included field training to ensure both Management and field personnel were comfortable with using the application. 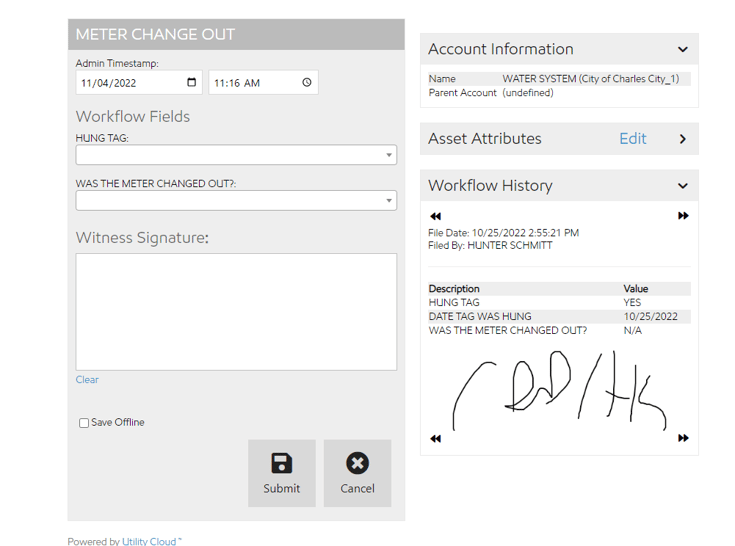 The operator completes the form in the field and it syncs to the office in real-time. If a follow-up work order is needed, it is automatically generated based on triggers depending on the response to certain areas on the form.

Cory first learned about Utility Cloud from a Facebook group. He had posted a question to his industry peers, asking what solutions they were using for asset management. The team at the City of Charles City did their due diligence, demo’ing Utility Cloud, Cartegraph, and Cityworks. Out of the three, there was a consensus that Utility Cloud not only seemed like the least complicated, but they could also create work orders for pretty much anything they needed. Their team would have access to all their information in one place. Additionally, they could make changes and deploy them to the field on their own without needing someone highly technical, yet they’d still have access to Support when they need it. With the competitive products, they would need to contact the company to make simple changes to a form.

Here are a few tasks the Department is using Utility Cloud for:

These Stories on Utility work management

What to look for in a utility work management software solution